The Thunder SATA Go is a miniaturized version of Akitio’s popular Thunder Dock product that allows you to connect SATA and RAID devices directly to your laptop through a single Thunderbolt cable. Also of note is the ability to “…can also be used to connect an SSD directly to a laptop…with transfer speeds of up to 550MB/second”, meaning those in the field with digital recorders can now directly link them for editing in the field. The speed and reliability offered by the Thunder SATA Go keeps Akitio ahead of the game as “Today’s increasing demand for media-rich entertainment requires accelerated access to data for the most demanding high-performance applications.” “When you’re on a deadline, every second counts,” says Akitio’s VP of Sales & Marketing Richard Wright. “Raw data on an SSD can be passed along to a DIT for editing and the filmmaker can insert a new SSD into the camera and continue filming at the same time that editing is taking place. We believe this innovative product will become an integral part of on-site filming & editing.”
Akitio recently published an extensive first look on their blog from Chinese blogger “Stanley”:

“Hey, what’s this?” asked Stanley, when he borrowed an AKiTiO Thunder2 Quad from AKiTiO for a review.
He saw this little gadget laying on a table, thinking it is some kind of card reader but as it turned out, this is actually an eSATA to Thunderbolt adapter with two eSATA 6Gbps ports.
Perhaps you still have one of those earlier external drives with multiples interfaces including eSATA, USB 2.0 and FireWire 800?
Unfortunately, since the new Mac computers now all feature Thunderbolt technology those interfaces are pretty much useles, right? That is, unless you are ready for USB 3.0. 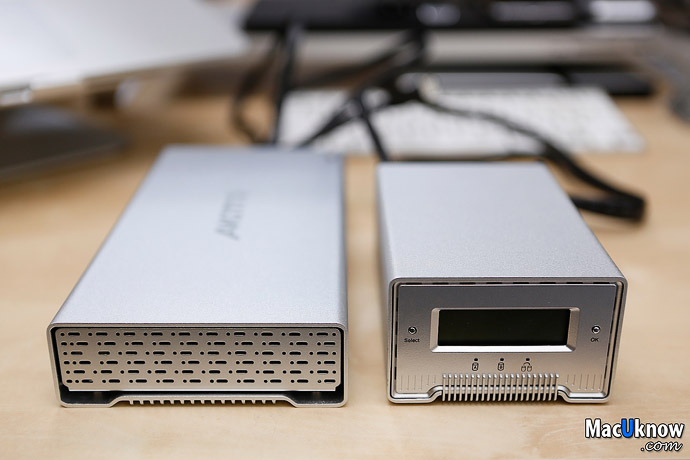 Actually, there is no need to worry. Among the three interfaces (eSATA, USB 2.0 and FireWire 800) eSATA at 3Gbps is the fastest and nowadays there are even enclosures available with eSATA 6Gbps and USB 3.0 connectivity up to 750 MB/s. All you need is find a way to connect these devices to the new Mac and you can extend the life of these devices and even compete with Thunderbolt to some extend.

The Thunder SATA Go will be available early 2015 at Akitio.com, Amazon.com, and Akitio’s other resellers for the super affordable price of $99. For more information and to see the full first look, be sure to visit Akitio.com

Transfer 4K video, in the field, at transfer speeds of 550MB/s!

Brea, Calif. – Akitio, a leading manufacturer of storage solutions, announced today the unveiling of its new, portable, bus-powered, Thunderbolt to SATA mini dock. The Thunder SATA Go will be available for $99 at Akitio.com, Amazon.com and from other fine resellers in early 2015.
The Akitio Thunder SATA Go features an all-aluminum, unibody design. It allows users to connect their SATA storage and RAID devices, but does so in an extremely portable, bus-powered solution. The Thunder SATA Go can also be used to connect an SSD directly to a laptop computer so that content editing can be done in the field with transfer speeds of up to 550MB/second.
“One of our best selling products is our Thunder Dock. This is basically a mini, SATA only, version of that without the need for external power. Another great feature of the Thunder SATA Go is that it provides filmmakers with the ability to connect any SSD, straight from their camera, regardless of brand or capacity, directly to their laptop without it needing to be plugged into a power outlet. When you’re on a deadline, every second counts. Raw data on an SSD can be passed along to a DIT for editing and the filmmaker can insert a new SSD into the camera and continue filming at the same time that editing is taking place. We believe this innovative product will become an integral part of on-site filming & editing”, said Richard Wright, Vice President of Sales & Marketing at Akitio.
The Akitio Thunder SATA Go is ideal for Thunderbolt equipped notebooks, such as the Apple® MacBook Pro, MacBook AIR and HP ZBook workstations.
As a leader in Thunderbolt solutions, Akitio consistently delivers products that optimize performance, speed, power, form factor and cost. Today’s increasing demand for media-rich entertainment requires accelerated access to data for the most demanding high-performance applications. Akitio products, such as the Thunder SATA Go, provide users with reliable solutions for accessing and transferring data intensive applications such as 4K video both on-site and in the studio.
About Akitio
More information about the complete line of Akitio products can be found by visiting akitio.com, or contacting sales@akitio.com.