The bulk of production is focused on shooting lessons for the Fender Play® platform, the complete learning app for acoustic and electric guitar, bass and ukulele. Along with producing various spots and additional promotional material, they have a packed schedule. Now averaging one hundred videos per month, the Fender Play® studio has produced over 700 videos since going live.

Each Fender Play® studio setup features Pocket Cinema Camera 6Ks, which feed into ATEM Mini Pros. MultiDock 10Gs are used for tethered recording, while SmartView Duo and SmartView 4K monitors, along with a MultiView 4, are used for reference. 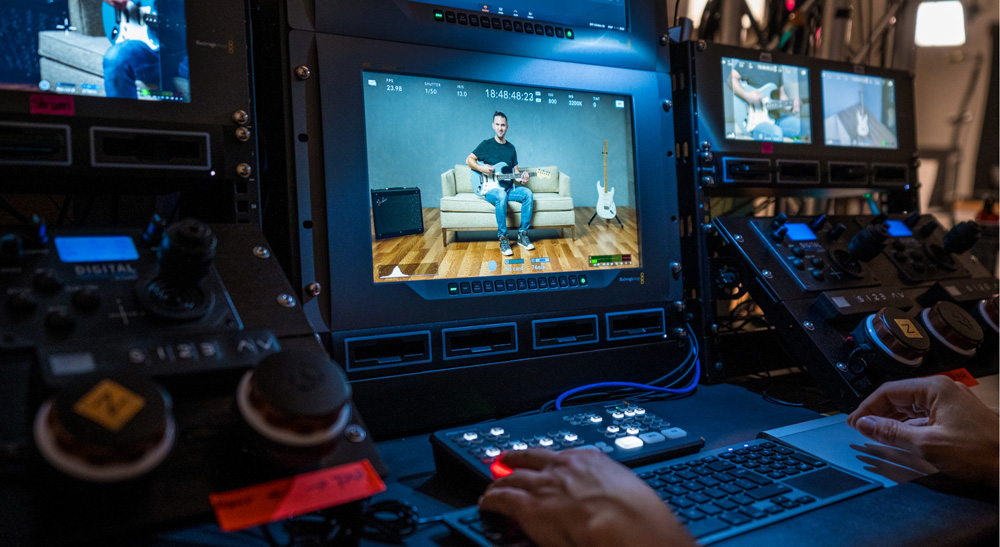 “Our production and post workflows run simultaneously and continuously, which in many respects, run like a normal broadcast production day,” said Martin Christien, Fender’s digital studio design consultant. “Each stage of production is both physically and technically spaced out to keep everyone safe.”

“Today’s safety protocols pushed this new compartmentalization of our production workflow,” added Derek Snowden, Fender’s digital Director of Studio Operations. “We needed to maintain quality and output volume but above all keep our crew safe at all times. This meant we needed to create and implement new contactless protocols, both in our technical workflow as well as our production process.”

The Fender Play® Hollywood studio employs a hub and spoke model with independent components, such as Pocket Cinema Camera 6Ks, feeding back to a central control hub in the studios where the ATEM Mini Pros, MultiDock 10Gs and SmartView monitors are located.

“Following this structure throughout the entire workflow means everything needs to be monitored or controlled without physical interaction with the components,” explained Snowden. “When we need to adjust camera settings or start rolling, this must be done remotely. Even the media records back to the control console to preserve distance between crew members.” 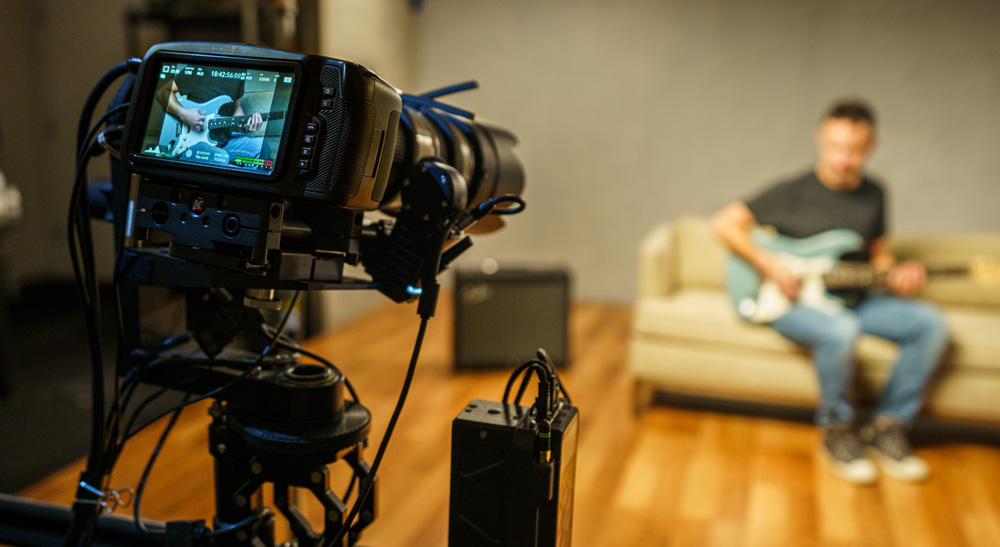 Christien highlighted Blackmagic RAW, the Pocket Cinema Camera 6K’s and MultiDock 10G’s USB‑C based recording and the ATEM Mini Pro’s camera control features as the backbone of the new workflow. “These key features have brought professional studio and remote capabilities to a lighter weight production workflow. Blackmagic RAW provides a new level of latitude and depth in the image that we simply didn’t have before, not to mention something you rarely obtain in conjunction with a broadcast style workflow,” he noted.

Pairing the Pocket Cinema Camera 6K with the MultiDock 10G creates a tethered media capture system that records Blackmagic RAW to SSDs. For camera monitoring and control, using the ATEM Mini Pro’s ATEM Software Control provides a camera workflow similar to a professional broadcast studio. This also doubles as a private broadcast interface, as the ATEM Mini Pro is used to stream the camera feed outside the building to crew members operating remotely.

“The need to be fully remote and contactless was not a natural evolution, it was a forced conversion,” Snowden continued. “Quality is paramount for Fender Play®, and the ability to reliably generate continuous content and maintain that quality was very much at risk. Not only have we achieved that at our Hollywood studio, but we’ve been able to execute on all the needs that a COVID-19 workflow has challenged us with as well as keeping these unplanned costs to a minimum.

“Blackmagic Design offers a technical feature set that is not isolated to specific products,” included Christien. “Rather, a workflow methodology can be realized that connects every branch in the signal chain. This makes designing and building out projects, such as the Fender Play® studio, infinitely easier to conceive and bench test. Throw the enormous challenges of contactless, remote production on top of that, and it makes the Blackmagic Design ecosystem invaluable.” 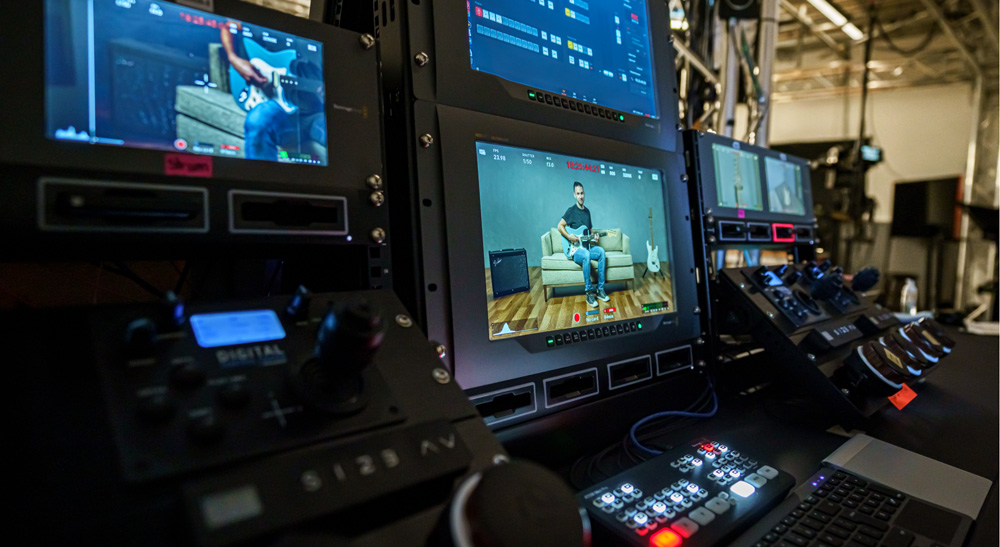 Since 1946, Fender has revolutionized music and culture as one of the world’s leading musical instrument manufacturers, marketers and distributors. Fender Musical Instruments Corporation (FMIC)–whose portfolio of owned and licensed brands includes Fender®, Squier®, Gretsch® guitars, Jackson®, EVH®, Charvel® and Bigsby®–follows a player-centric approach to crafting the highest-quality instruments and digital experiences across genres. Since 2015, Fender’s digital arm has introduced a new ecosystem of products and interactive experiences to accompany players at every stage of their musical journey. This includes innovative apps and learning platforms designed to complement Fender guitars, amplifiers, effects pedals, accessories and pro-audio gear, and inspire players through an immersive musical experience. FMIC is dedicated to unlocking the power of musical expression for all players, from beginners to history-making legends. In 2021, Fender celebrates 75 years of giving artists “wings to fly,” carrying on the vision of its founder, Leo Fender, and connecting players through a shared love of music.