Headquartered in Frederick, MD, Flying Dog Brewery believes that beer is an art form, and they are known for their eccentric and humorous marketing. Launching new beers constantly, and trying to stand out in an incredibly crowded market, video has become one of their biggest differentiators.

“Cinematic and hilarious are the descriptors we get for our video content. From the beer we produce to the disobedient advertising we are always taking risks. There is no shortage of creative freedom and expression,” said Kyle Romanek, the Flying Dog Brewery’s head of video production and two time Daytime Emmy Winner.

Romanek started working for Flying Dog Brewery after leaving California and a career in film, documentary and commercial production, which included creating short films for the Oprah Winfrey Network. After eighty years in California, he decided to move back to Frederick, MD to find new inspiration.

Using the URSA Mini Pro 4.6K G2 as his A camera for any project, along with a Pocket Cinema Camera 6K Pro, Romanek has been shooting a huge number of videos for Flying Dog Brewery. Romanek handles all of the post production himself, which includes color correction using DaVinci Resolve Studio. 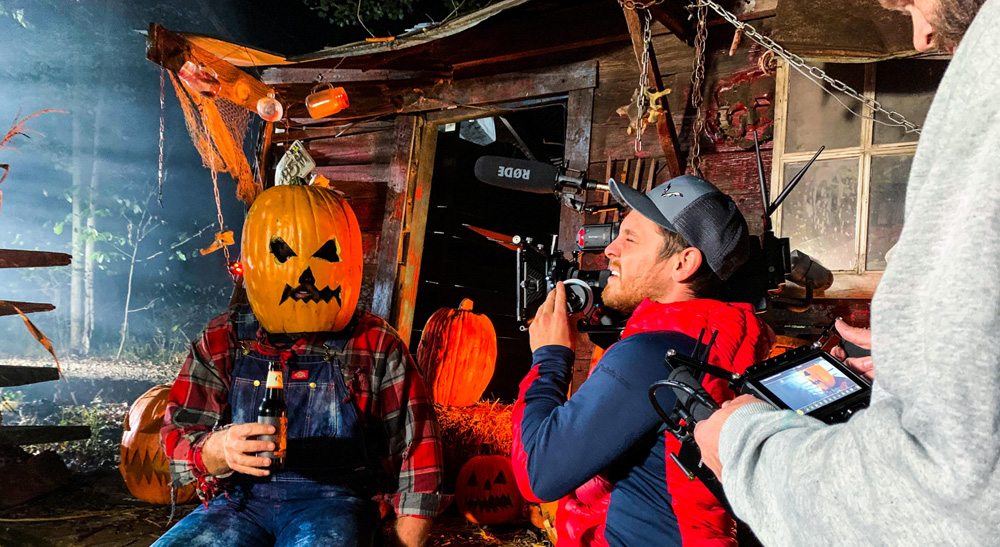 “I’ve found that my reliable Ursa Mini Pro can be applied to any application. Whether it be documentaries, commercials, product videos or narrative projects, the URSA Mini Pro G2 is my A cam and I treat her as such. She’s the queen,” he said.

In recent months, the brewery has shot a steady stream of videos for its Facebook, Instagram and Vimeo channels. These include a mix of tasting videos, launches for new flavors, looks at local customers, commercials and mini documentaries, such as a recent documentary about a man paddling the length of the Chesapeake Bay. An event sponsored by the brewery. They also shoot videos for wholesalers and internal staff, including a yearly Brewhouse Rarities event where employees pitch new beer ideas. Even during the long period of Covid restrictions, they were able to use the Blackmagic cameras and DaVinci Resolve to quickly shoot and finish dozens of new videos.

The URSA Mini Pro 4.6K G2 and Pocket Cinema Camera 6K Pro’s high dynamic range, ease of use and efficient design allows Romanek to be extremely creative. A recent example was the launch of the Vicious Hook Fruit Punch Sour annual beer, which is a vibrant pink color and included a boxing theme around its marketing. To launch the beer, they shot two commercial spots with the URSA Mini Pro 4.6K G2, shooting in Blackmagic RAW.

“One of the spots was a black and white gritty boxing video that transitions into a game of Rock ‘em Sock ‘em Robots and the other is what we like to call snackable ‘eye candy’ where we focus on the beer, packaging and the pour,” he continued. “For this one what you really want in your image is dynamic range and at 15 stops with the URSA Mini Pro you really can’t complain. With the snackable video, Blackmagic RAW’s 12-bit image was essential. When it comes to the RAW image and color accuracy coming out of these cameras, it’s unmatched at this price point. Pink liquid has never looked so good.”

Moving forward, Flying Dog Brewery is going to be focusing on increasing the number and types of videos they post on their YouTube channel.

Romanek continued: “My job is to be as creative as possible and promote a lifestyle around our beer using video. Sure, other breweries can make a sexy beer pour shot but not many breweries our size are producing story driven commercials with actors and compelling mini documentaries. With that said, Youtube will be a major influence in the coming years. And Blackmagic gear is paramount to the success of these productions. The Blackmagic cameras are a filmmakers dream allowing us to shoot a wide variety of content. I’m eternally grateful for the care that Blackmagic brought to the table when developing these cameras.”