Trapped in an abusive relationship with her boyfriend James (Logan Fleisher), Olivia Davis (Jessica Strayer) is able to flee with the help of a kindly stranger, Thomas (Thomas Cheslek). Soon Olivia’s fear from past traumas begins to extend to Thomas, who claims he only wants to keep Olivia safe. But as she discovers Thomas is hiding a mysterious project from her, Olivia convinces herself she must flee once more, even if she knows she isn’t safe on her own. With no good choices, Olivia must face her fears to escape her past.

Filmmakers Nate Strayer and Isabel Machado-Rodriguez had decided to escape the pandemic in 2020 by relocating back to a family home in Grand Rapids, Michigan. The plan was to quarantine with family, yet as filmmakers they had little patience to wait for the world to open back up before they produced a project. “After a long discussion about first feature films, budgets involved and what it would take for us to make a film sometime in the future,” said Strayer, “we decided ‘why not do it now while we have all this time?’ That night we all sat down as a family and started brainstorming what locations we had access to, and what types of stories we could tell using them.”

The result was the screenplay for “Outlier,” a thriller designed not only around available locations near their Michigan family home, but also limited cast and crew. With Strayer as director and Machado-Rodriguez as cinematographer, the two decided to shoot the project entirely on their Blackmagic Pocket Cinema Camera 6K. “The idea that we could shoot a feature film that looks just as good as the films we love, on a tiny, lightweight, relatively inexpensive camera seemed too good to be true,” said Strayer. “Luckily though, I had owned the camera for about 6 months by the time we wanted to start this feature and I had already been blown away by the dozens of projects we were able to complete with the Pocket 6K.”

Insisting on adhering to Covid protocols meant the cast and crew, even if small, would need to stay in the same house for the duration, a necessity that ended up helping the film, rather than hurting it. “The whole cast and crew stayed in the same house, woke up together, ate breakfast together, went and shot, then would wind down watching a film to pull ideas or inspiration from every night,” said Strayer. “In fact, Covid almost gave us an advantage because we had nowhere else to be. What we lacked in money we made up with time. Some days we’d finish shooting a scene and I’d edit together a cut in Resolve, and realize we missed something, or that it wasn’t quite what we wanted. We knew we could just wake up and do it again the next day.”

Despite a captive cast and crew, the challenge of shooting a low budget film with limited resources still posed challenges. But the Pocket CInema Camera 6K, and the Blackmagic RAW codec, helped bridge the gap between quality and no gear. “We used mostly natural light, we had a couple of bounce boards and some lights that we got from a hardware store, and that was it,” said Machado-Rodriguez. “Most of the time, we were a two person crew, so there were a lot of situations where I was worried about matching takes. I was impressed by the dynamic range we had to play with in Blackmagic RAW. The footage looked incredible, and it was so simple to work with when it was time for post production.”

Later, for reshoots, with Machado-Rodriguez unavailable, Strayer brought in long time collaborator and cinematographer Joe Failla to finish out the film. No stranger to the Pocket Cinema Camera 6K, Failla was excited to continue the photography with the camera. “We were able to shoot much faster with the Pocket 6K than we could have with a large studio camera. We needed to shoot quite a bit of ‘Outlier’ handheld and the overall weight allowed us to use energy making creative decisions instead of lugging around an oversized camera. The Pocket 6K can be stripped down and functional for run and gun work like ‘Outlier’ called for without compromising on image quality, or it can be decked out with all the bells and whistles modern productions call for.”

Though Strayer planned to bring editor Mike Hugo aboard in post production, the process of starting the edit in DaVinci Resolve Studio while shooting made the most sense. “Cutting in Resolve felt like the natural thing to do. Going from Pocket 6K Blackmagic RAW footage recorded onto an SSD, and then plugging that same SSD into our computer was the most seamless way to look at dailies that I’ve ever experienced. We could have a scene roughly edited minutes after shooting to make sure it worked. I ended up just doing the rough cut and then handing it over to our talented editor Mike Hugo, but my experience with Resolve was seamless and intuitive.”

For Hugo, this would be his first project editing in DaVinci Resolve Studio. “I had been hearing a bunch of good things about editing with DaVinci Resolve and was waiting for the right project to really dive into the trenches. I was very accustomed to the Resolve Color workflow, largely from setting up and conforming for color work, and I’ve cut on almost every edit platform out there, so as soon as I figured the different naming conventions within the Edit tab and setup my keyboard accordingly, I hit the ground running.”

Hugo was surprised how quickly he was able to get up and running. “With the film shot on the Blackmagic Pocket 6K, Nate just shared all of the camera masters and project with me via backup hard drive shipped from Michigan. Mounting the 6K files from my desktop RAID to my Mac Pro I then had the system create cache files in the background while I started to get familiar with the project. Very simple and painless. Setup went way faster than I was used to and didn’t bog my computer down. Also, being able to apply an overall REC709 Film LUT simply in the project preference panel was awesome, and then I didn’t have to think about it again.”

The final grade was created by Ryan McNeal at RKM Studios in Burbank, using DaVinci Resolve Studio. To avoid in person sessions, RKM utilized a livestream setup to allow Strayer direct interaction with McNeal. “I could watch the final image be crafted while simultaneously on a Zoom call discussing and collaborating on the image. This was actually beneficial because it allowed our DP’s to jump in and out whenever they had specific notes on a scene.” 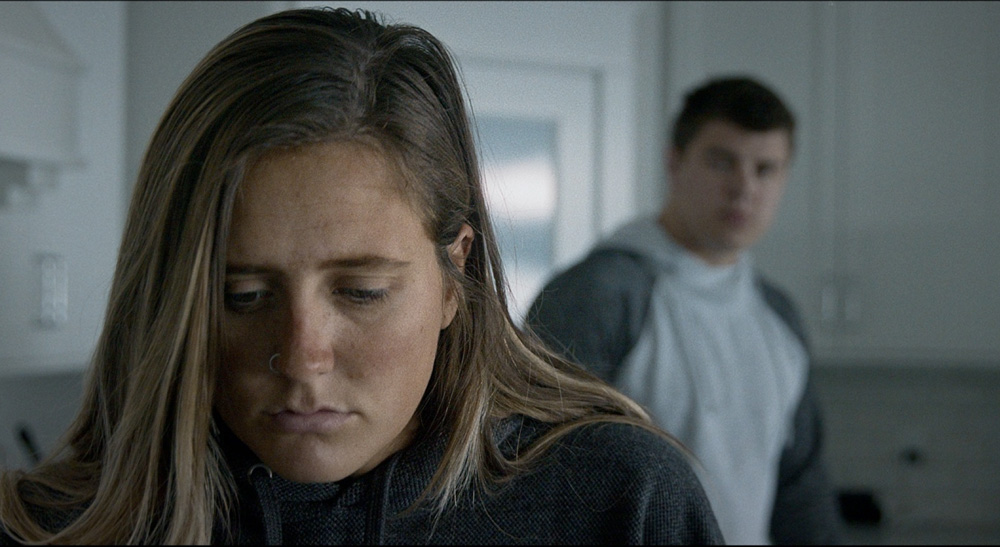 McNeal used a proprietary server system developed at RKM, that allowed color accurate footage from Resolve to feed over the web with ultra low latency and compression. “We started with a session with all hands on deck,” said McNeal. “We picked significant scenes and created looks on key shots. From there I worked mostly with Nate to get that style across the scenes in additional sessions. After everything had received color, we brought the DPs back into a final session to do watch downs and note passes.”

Failla was happy the film was being shot with Blackmagic RAW, both in helping alleviate the challenge of no gear, as well as for flexibility in the grade. “Shooting in Blackmagic RAW allowed for a ton of creative freedom both on set and in the DI. We didn’t have the big lights and grip support that could have easily solved problems on set, which forced us to push the digital negative way further than I normally would have been comfortable with. In color, Ryan was able to save highlight detail that would have been lost on almost any other format.”

McNeal was pleasantly surprised at the data Blackmagic RAW gave him to work with. “There was an exterior scene at a gas station that had super bright highlights, and I know it had been a concern in the offline edit that the highlights might not be salvageable. In the edit they were viewing through a LUT, but the Blackmagic RAW camera files actually contained enough information for good exposure in the sky as well as the subjects. I remember Nate being particularly worried about that scene prior to color.”

A long time DaVinci Resolve colorist, McNeal has graded a variety of projects, from independent features like “Outlier” to music videos for bands such as Panic! At the Disco and Diplo. His experience allows him to create unique looks on every project, using DaVinci Resolve’s wide range of tools. “I’ve become a fan of the Resolve OpenFX plugins that ship with DaVinci Resolve Studio. I used the Glow affect for subtle bloom throughout ‘Outlier’. With the right settings and blending, you can get a nice ProMist feel in the highlights. I have a power grade I created that also utilizes the Glow plugin and dynamic mattes to create a halation effect on the high contrast points of the highlights. I really like the control I have in that power grade.”

With their first feature film behind them, Strayer and Machado-Rodriguez are excited with what they accomplished. “’Outlier’ was for sure a challenge for our creativity, from how we were going to dress our actors to how the house was going to look,” said Machado-Rodriguez. “Although with the Pocket 6K just about everything you point it at looks like a movie with the right lighting.” Strayer is eager to look to the next project and expand on what they’ve learned. “I want to spend every year the way I spent 2020, being creative with a group of amazing and collaborative people to tell stories. If this movie allows me to do that another year, then in my book I view it as a success.” 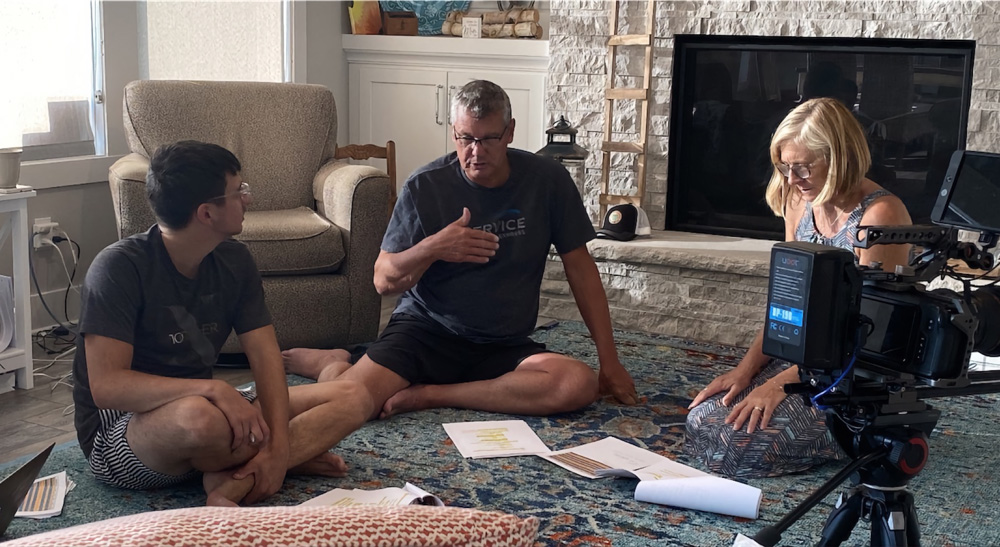