Blackmagic Design announced today the release and current availability of not only a new broadcast camera, the URSA Broadcast, but two new ATEM control panels and more.

You can learn more about the URSA Broadcast and its accessories by following the links above and reading the press release below. For more on all things Blackmagic Design, simply visit BlackmagicDesign.com 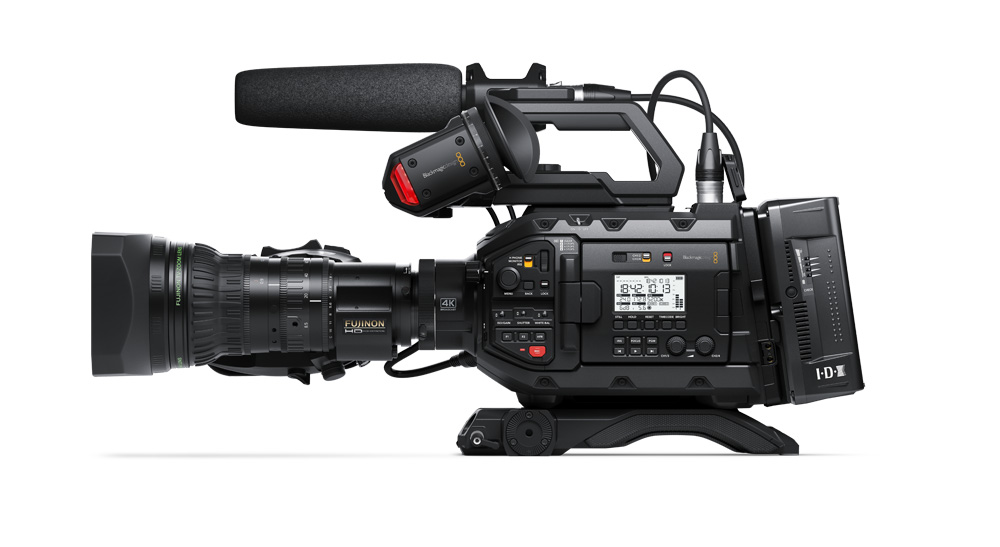 The world’s most affordable and flexible professional HD and Ultra HD broadcast camera for live production and studio programs, at the same price as a DSLR camera!

Fremont, California, USA – February 1, 2018 – Blackmagic Design today announced Blackmagic URSA Broadcast, a new high end, professional broadcast camera designed for both studio programming and live production. URSA Broadcast works with existing B4 broadcast HD lenses, can be used for both HD and Ultra HD production, features a 4K sensor, extended video dynamic range, traditional external controls and buttons, built in optical ND filters, dual CFast and dual SD card recorders, and much more. Blackmagic URSA Broadcast is available now for only US$3,495 from Blackmagic Design resellers worldwide.
URSA Broadcast is like two cameras in one, an incredible field camera for ENG and programming work, as well as a professional studio camera. The camera features traditional broadcast controls along with exceptional image quality, all in a compact design that is ideal for fast paced, fast turn around production work. The key is URSA Broadcast’s new extended video mode which captures incredible looking video with accurate skin tones and vibrant colors. That means customers don’t have to color correct images before going to air, making URSA Broadcast perfect for news, live sports, studio talk and game shows and more. URSA Broadcast lets customers shoot, edit and get stories on air faster than ever before.
URSA Broadcast is also designed to work with the equipment and systems traditional broadcasters already have. For example, customers can use their existing B4 HD and Ultra HD lenses with URSA Broadcast. Unlike other broadcast cameras, URSA Broadcast records onto inexpensive standard SD cards, UHS-II cards and CFast cards, and records 1080i or 2160p video into standard .mov files, with .mxf to be added in future updates. URSA Broadcast records using DNx145, DNx220X or ProRes, so video doesn’t need to be copied or transcoded. This makes it fast to work with video from URSA Broadcast because it’s compatible with virtually all existing broadcast systems and editing software.
The B4 lens mount and matching sensor on URSA Broadcast enables wide depth of field, so broadcast customers can shoot without constantly chasing focus. The lens mount features high performance optics with spherical aberration correction specifically designed to match the camera’s sensor. The ⅔” mount lets customers use existing HD lenses or Ultra HD lenses. Because B4 lenses are par-focal and have an extremely wide depth of field, images stay in focus when zoomed in and out. That lets customers work faster because they don’t need to change lenses or refocus between close up, medium and wide shots. URSA Broadcast also supports full electronic B4 lens control so customers can adjust focus, iris and zoom using the camera’s controls, or remotely from an ATEM switcher or ATEM Camera Control Panel. In addition, the standard B4 lens mount can be swapped with optional EF, F and PL mounts so customers can use everything from inexpensive high quality photographic lenses all the way up to massive cinema lenses.
URSA Broadcast features a high quality 4K image sensor and a new extended video mode with better dynamic range and color fidelity. The sensor is designed for both HD and Ultra HD, producing images with fine texture and detail, accurate skin tones, vibrant color and high dynamic range. The images from URSA Broadcast have been designed to be used without additional color correction. This makes editing faster, which is crucial in the fast paced broadcast world. The high resolution sensor is a huge advantage, even when working in HD, because it enables sub pixel image processing and superior anti-aliasing, resulting in super sharp images. 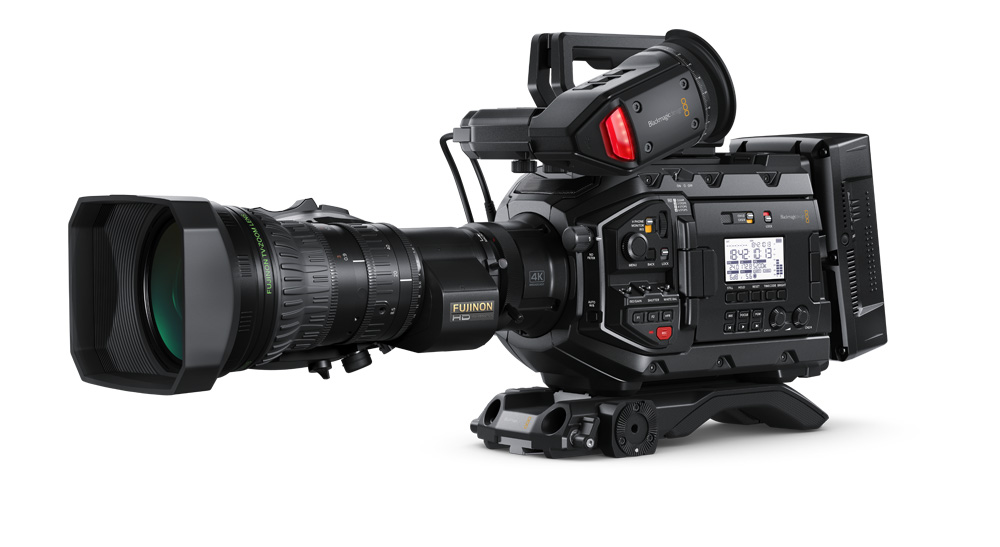 URSA Broadcast is designed to be the toughest and most fully featured camera available. It includes everything customers need in a compact handheld magnesium alloy body that’s durable and light enough to use anywhere. There’s an external high visibility LCD status display for viewing critical shooting information, a foldout touch screen for reviewing shots without needing an extra on-set monitor, professional connections such as 12G‑SDI, XLR audio, built in high quality stereo microphones and more. Plus, every single control on the camera has a redundant backup, including the power, so if anything should go wrong in the field, the camera can still be used.
URSA Broadcast also features built in neutral density (ND) filters with IR compensation for quickly reducing the amount of light that enters the camera. The ¼, 1/16th and 1/64th stop filters are specifically designed to match the colorimetry of the camera and provide additional latitude, even under harsh lighting conditions. That means customers can use different combinations of aperture and shutter angle to achieve shallower depth of field, or specific levels of motion blur, in a wider range of situations. The IR filters evenly compensate for both far red and infrared wave lengths to eliminate IR contamination. The ND filters are true optical filters with a precision mechanism that quickly moves them into place when the ND filter dial is turned.
Blackmagic URSA Broadcast puts control buttons, switches, knobs and dials on the outside of the camera, giving customers direct access to the most important camera features. The controls are laid out in a logical order that makes them easy to remember so operators can use the camera without having to look at the buttons, hunt through menus, or take their eye off of the action. URSA Broadcast also features a high visibility LCD status display which shows important information such as timecode, shutter and lens settings, battery, recording status, and audio levels. The status display features a backlight and is designed to be clearly visible in both dimly lit studios and outside in direct sunlight.
URSA Broadcast features both dual CFast 2.0 recorders and dual SD/UHS-II card recorders. Both types of media are standard, non-proprietary, inexpensive and readily available at most computer and camera stores. Customers can record 10‑bit broadcast quality DNxHD 220X, DNxHD 145 or ProRes files with metadata, making it is easy to integrate URSA Broadcast into existing broadcast systems and workflows. URSA Broadcast can even record lossless 12‑bit CinemaDNG RAW files for high quality programming and post production. With dual slots for each media type, URSA Broadcast gives customers redundant recorders and non-stop recording. When the first card is full, recording automatically continues onto the next card so the full card can be swapped while recording continues on the other.
All of the connections on URSA Broadcast are standard television industry connectors so customers don’t need expensive, proprietary cables. The camera features multi rate 12G‑SDI connections for video output and return program feed input. Both connections automatically switch speed so they work with all HD and Ultra HD formats up to 2160p60 over a single cable. In addition, URSA Broadcast features HD-SDI monitoring out, 2 LANC inputs, balanced XLR audio with phantom power, and timecode/reference input. A 12 pin Hirose connector provides analog and digital broadcast lens control for powering and controlling SD, HD and Ultra HD lenses. There’s also a 4 pin XLR 12V DC power output and HD-SDI monitor output that can be used with Blackmagic viewfinders or any third party viewfinders and monitors.
Blackmagic Design also makes a complete set of professional camera accessories designed to work perfectly with URSA Broadcast. Customers can add a Blackmagic URSA Viewfinder or a large 7 inch Blackmagic URSA Studio Viewfinder. There are microphone mounts, standard V-Lock and Gold battery plates, optional lens mounts and more. The all new Blackmagic Camera Fiber Converter, Blackmagic Studio Fiber Converter and ATEM Camera Control Panel let customers create a complete broadcast camera chain that costs hundreds of thousands of dollars less than traditional camera chains. The fiber converters let customers extend their cameras and power them from up to 2 km away using industry standard SMPTE fiber cables. It includes 1 Ultra HD camera feed, plus 3 HD return feeds, common live camera controls with multiple channels of talkback, and standard television industry talkback headset connections, all in a compact IP video based design that allow it to be connected and controlled from a live production switcher. 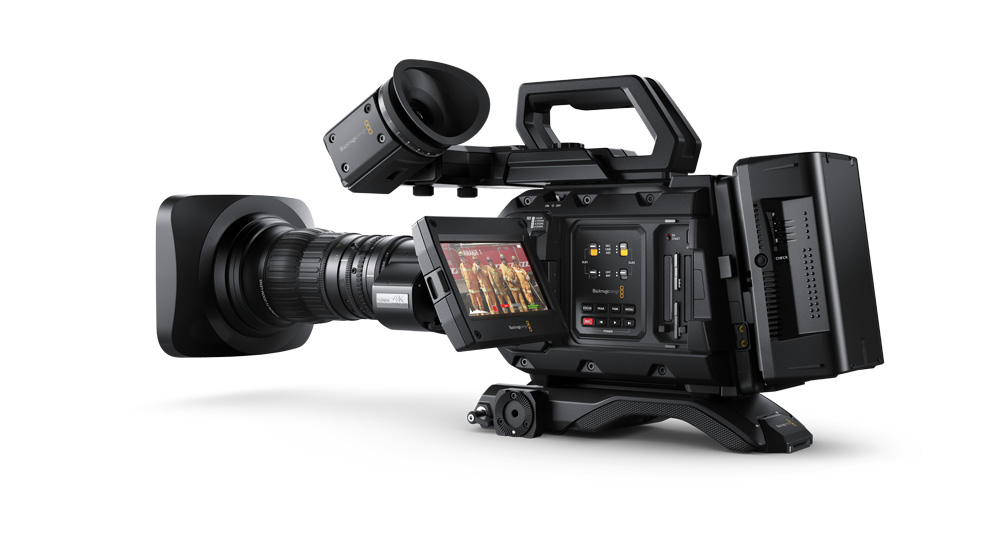 “URSA Broadcast lets customers get the most out of their investment in cameras and lenses because it can be re-purposed and used on every type of project, whether it’s out in the field or in the studio. It’s like getting two cameras in one.” said Grant Petty, CEO, Blackmagic Design. “URSA Broadcast is exciting because it makes high end broadcast camera technology available to everyone from AV and web producers all the way up to professional broadcasters, for the same price as a common DSLR!” 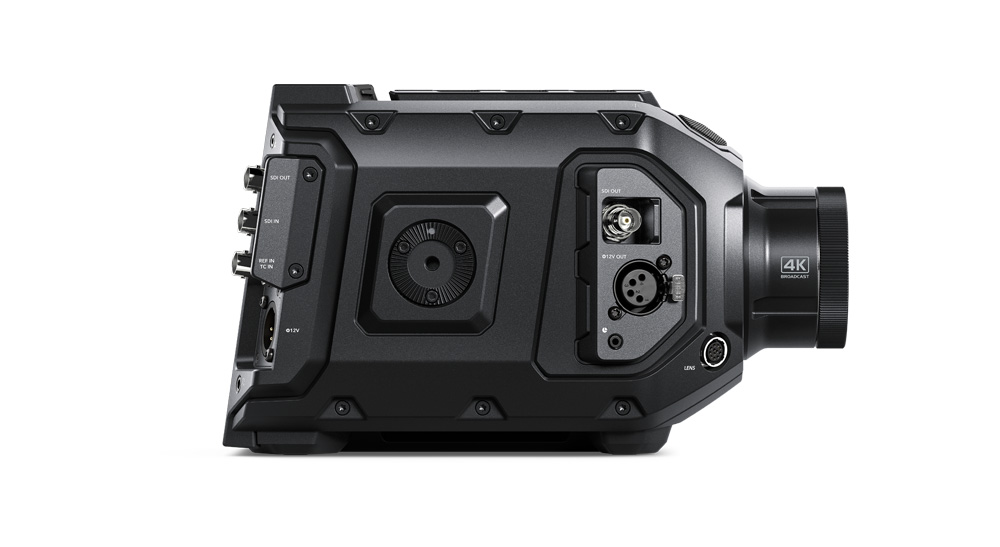 Blackmagic URSA Broadcast is available now from Blackmagic Design resellers worldwide for US$3,495.

Product photos of Blackmagic URSA Broadcast, and all other Blackmagic Design products, are available at www.blackmagicdesign.com/media/images